This Dum Aloo dish is infused with amazing fragrant spices like fennel, cinnamon and cardamons used in Kashmiri cooking. Every household has it’s own variation of a Kashmiri Dum Aloo recipe, some use onions and others use Asafetida (hing). Mine is with fried onion paste for which I used a mortar and pestle the old fashioned way. Onion paste is also commonly used in Mughlai cooking.

Kashmiri red chili powder is what makes it hot. I also carried some cockscomb flower (mawal) powder with me during my last visit which just adds color to the dish. This is totally optional and I have not listed it as an ingredient.

“Dum” cooking is simply a slow cooking method that uses needs a tight lid on the container so the steam can do its magic.  History tells us the technique may be based on earlier Persian cooking methods introduced to India.

The recipe can be thought of in 2 parts so it does not look so intimidating. Get the potatoes ready; get the sauce ready. Mix them and slow cook…easy 🙂

I used round organic red potatoes for this but you can use any variety that is 1 to 1 1/2 inch round. Frankly you could cut up large potatoes in big pieces and use that too. The round potatoes are authentic and look cool.

Don’t forget that you need to use a toothpick to prick holes in the boiled potatoes before frying. This creates the avenue for the spices to seep into the core of the potato.

Very excited to be sharing this with friends on Fiesta Friday

Here is what you need:

Serve with naan or rice. A dash of lemon juice will add bring out more of the flavor.

This site uses Akismet to reduce spam. Learn how your comment data is processed.

great food and discovery of the soul

Food For the Soul

Food For the Soul 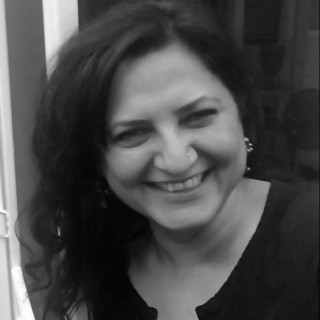 My life was nourished and nurtured in the beautiful vale of Kashmir painted with mountains, lakes, running streams and meadows that know no end. Now in another beautiful part of the world in the US, I cook for the love of good healthy food…that feeds the soul. I recreate recipes that shaped my history and culture. For the love of discovering life and all things that speak to you and urge you on to evolve, touches your soul and make your journey through life a fulfilling experience.